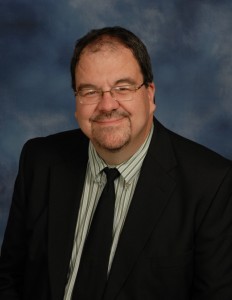 Pastor Brent Robinson was born in Williamsport, PA, in 1962. His family attended a small Protestant church, but it was through a neighborhood Bible Club at the age of five that he was challenged to personally trust in Christ as Savior. During his Junior High years, he wanted to know for certain that Jesus was his Savior. His church did not emphasize the need for a personal response to Christ, but the Bible Club camp he attended was clear: each person must admit their sin, believe Christ died and rose again for their sin, and then pray to receive Christ as personal Savior. He sat alone in his living room that summer afternoon with his Bible and prayed, “Lord, help me to be sure right now through Your Word that I am going to heaven. If I can’t be sure, I will call the 700 club number from the TV and get some help.” He did not want to call that number, so he opened his Bible and came to Ephesians 2:8,9. He recognized once again that the gracious gift of salvation was received by faith; his works had nothing do to with it. He knew he believed it, and from that point on he would not doubt that he had received this precious gift.

When his parents separated a year later, Brent threw himself into all the music opportunities available at his high school. During his last years of high school, he and some other friends formed a gospel-singing group that had an extensive ministry in area churches. Sensing God’s call to church ministry, he went off to Messiah College as a Christian Education/Music major. He participated in and later led a gospel team that ministered weekly at Bethesda Rescue Mission in Harrisburg, PA. Being concerned about his lack of Bible training, he transferred to Lancaster Bible College, where he met Nancy, his wife, and interned at Washington Boro Church of God. In addition, every summer until beginning full-time church ministry, he would work at one or more Christian camps.

In the fall of 1985, Pastor Brent became the Assistant Pastor of Calvary Bible Fellowship Church in Sinking Spring, PA. He married Nancy in 1986 and was licensed as a Bible Fellowship Minister in 1988. In the winter of 1990, they moved to Baltimore, MD, where daughters Kelli and Stacie were born. Pastor Brent served as Minister of Christian Education at the Halethorpe Community Church and was ordained and commissioned as minister of the Gospel of Jesus Christ in 1994.

In the fall of 1996, Pastor Brent began his ministry at Bethel Memorial Baptist Church as Christian Education Director and later as Pastor of Ministry and Development. He received the degree of Master of Arts in Religion from Liberty Baptist Theological Seminary in the year 2000.

In the fall of 2006, Pastor Brent was called to be the fifth Senior Pastor to serve at Bethel. The Robinson’s count it a privilege to serve the Lord here at Bethel, “while we wait for the blessed hope–the glorious appearing of our great God and Savior, Jesus Christ” (Titus 2:13).